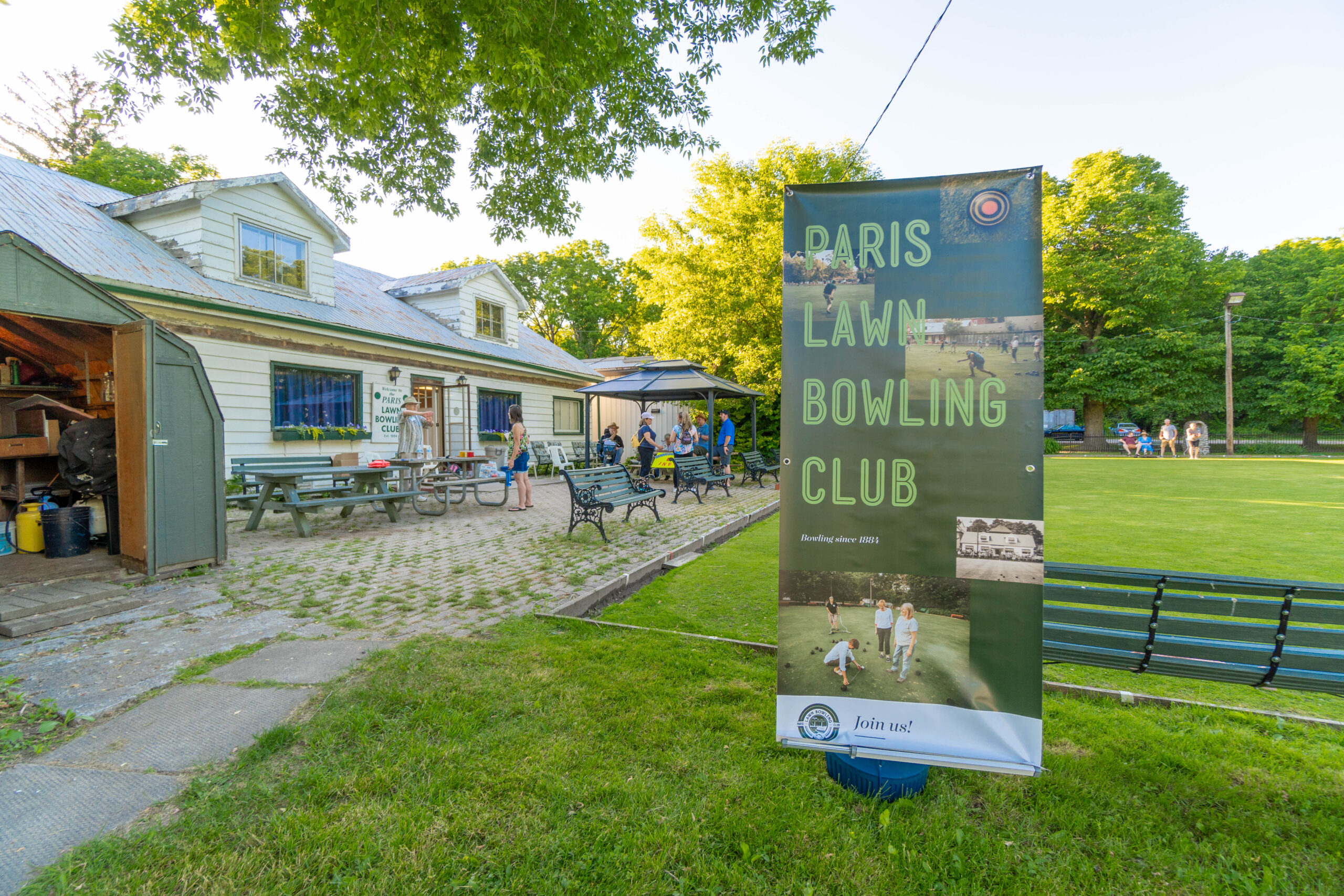 On any sunny summer day in Paris Ontario, you can find tourists posing for pics on the bridge over the Grand River.  The Prettiest Town in Canada is known for quite a few things.  There are also a few little-known gems such as being the proud home of the Paris Ontario Lawn Bowling club? Well, now you do, but before dawning your finest all-white attire, just what exactly is lawn bowling anyway?

Traditionally known as Bowls or Lawn Bowls is a game played outdoors on a closely trimmed lawn called a green.  Should you become immersed in the Lawn Bowls world you would probably learn there is also an indoor version that is popular in Britain.

The objective of the sport is to roll the ball so that it stops as close as possible to a smaller ball called a “jack” or “kitty”  The balls are referred to as Bowls and are biased (not perfectly round).  A properly sized Bowl will fit in your hand with your fingers wrapped halfway around.

The first Bowler will throw the Jack inside a marked track. The only regulation is that the Jack must be a minimum of twenty-five meters.

Although an official code of rules was not formulated until 1848 in Scotland, the game has been played for almost 7000 years!  Archaeological findings show that a game with biased ( not round ) stone balls was played by the Ancient Egyptians.

I wonder what the Egyptian Bowlers would think of our Lawn Bowling Club in Paris Ontario?  I think they might be impressed to learn the Paris Ontario Lawn Bowling Club was officially founded in 1884!  At this time the club was first set up on the grounds of the Paris Presbyterian Church on Grand River St North.  Before this, there was a green located on Andrew Baird’s front yard and at some point beside the skating rink on Elm St.  The club was incorporated in 1927.

The first of two clubhouses were built in 1928, paid for by Reginald Tunrball who also purchased the land and consolidated the deeds where the existing club now sits.  In 1984 the old clubhouse was sold and the existing one was built.  The club was prosperous until the early 80s, in 1986 the club sold the property to the Town of Paris for $1.00 and the town agreed to maintain the property as per the agreement.

2015 saw the lowest membership at just 13 members.  In 2016 local resident David Powell held a party and proposed a call to action to raise the membership.   2019 saw the member numbers rise to 75.  The pandemic hit shortly after and the closures weighed a heavy financial burden on the club.  Unless the membership increases it will cease to exist.

A full-year membership is only $90.00 so whether you are new to Paris Ontario or a lifetime Parisian, it is a sport that can be learned in 10 mins while simultaneously making friendships that can last a lifetime.  Sounds like a pretty good deal to me, just one more reason to love where you live.

“A full-year membership is only $90.00 so whether you are new to Paris Ontario or a lifetime Parisian, it is a sport that can be learned in 10 mins while simultaneously making friendships that can last a lifetime.”